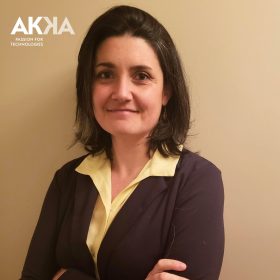 Tell me about your background and culture, where you took off and how it evolved.

My name is Laetitia. I grew up in France in a village close to Limoges, the world capital of porcelain. I studied Physics at the university of Clermont-Ferrand where I graduated with a Master in Electromagnetic Compatibility (EMC). I started my professional career at Toulouse in 2006 at Aeroconseil, a company acquired by AKKA a few years later. I worked on behalf of several aerospace companies for about 12 years. I worked on the lightning protection of different aircraft and also on the environmental qualifications of different systems. In 2013, I had the opportunity to work in Canada for 6 months, and 8 years later, I´m still here.

What’s the greatest challenge you’ve overcome in your professional/academic career?

The greatest challenge is definitely to work in different countries (France, Canada, United Kingdom, and Japan). The working culture, the country´s culture, and obviously the people are so different from each other that you have to adapt yourself to those new environments. But it is so enriching from a professional and personal point of view that it´s worth taking the plunge into the far away unknown.

AKKA has allowed me to support several customers in different domains and different countries. I worked for several customers in aerospace, including aircraft manufacturers, systems suppliers, and structure suppliers. I have been working in the railway domain for almost 3 years. Thanks to AKKA, I was given the opportunity to work in UK and Japan.

Tell me your hobbies/interests.

My main hobbies are photography, journeys, hiking in the mountains, badminton, and I like drawing (I´ve just started). The little inconvenience of photography here in Canada is winter. You have to wear very warm gloves but you can take such wonderful pictures that once you are out, you enjoy it and forget the freezing wing slapping your face!

Tell me about the greatest thing you’ve learned from a colleague/mentor.

Every experience I had have always been constructive and rewarding. I have had several colleagues, managers, or even customers from whom I have learned a lot. Some of my colleagues even have become my friends.