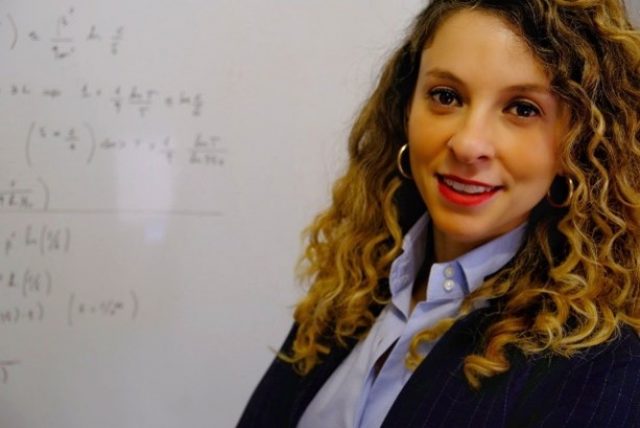 Daniela Angela Parletta, Research Engineer and Project Manager, is currently working on the COMP4DRONES, a research project for the use of drones in Agriculture.
A graduate in Electronic Engineering, with a solid background in Machine Learning and Artificial Intelligence, Daniela had very clear idea about what she wanted to do from a very early age. As a child, she used to watch Japanese anime and cartoons inspiring her to discover and learn more about robots and their capabilities. “Without knowing it, as a child I was already in love with Artificial Intelligence.”, she says “then, as I grew up, I developed a very strong interest in mathematics and at University I discovered algorithms applied to Machine Learning and Artificial Intelligence models. From there I tried to direct my career in this specific field”

Helping girls and boys to follow their own path

It is not an easy path, both because in Italy these technologies have not yet reached the level of acceptance by the market and because there are still few women in this field. Especially the area of research is lacking on female scientists: “At University the study course only had 8 women out of 87 students”, mentions Daniela. “Still, the female community is heavily underrepresented in STEM subjects, both during the studies and consequently, also in STEM career paths. I think this is strongly influenced by cultural biases that we are still struggling to change. When I was a child for example, I would always be given dolls to play with, but no one ever thought of giving me Lego bricks, which I now buy and collect as an adult”.

“But I’m excited to see that things are changing, and I hope that sharing stories like mine will inspire other girls to follow their own path”, adds Daniela. “As adults, we have to make an effort not to polarise the choices of boys and girls, leaving them free to dress in the colours they like, letting them choose the sports and games that appeal to them most, following their own personal preferences and not blindly following societal constructs. It’s not an easy change to do, but we have to try”.

Mathematics, a driving force for creativity

And if we ask her which superhero from her childhood inspired her the most, the answer is Batman. A  character who, “does not use superpowers like other superheroes, but prepares, studies, plans, organises, trains physically and intellectually to face his challenges”.

Today, Daniela’s challenge is to contribute to the development of an ambitious European research project which aims to create an ecosystem of key enabling technologies for the safety and autonomy of drones and their modular use through an open and shareable architecture.

The use-case chosen to launch the project is related to the use of drones for intelligent and precision agriculture, for the collection, processing and analysis of data in order to determine the most effective agronomic interventions and thus improve the quality and profitability of production.

The first two years she spent working on the COMPR4DRONES project gave Daniela the opportunity to express her love of mathematics to the fullest: “developing algorithms is an activity that allows you to use mathematics creatively. I would never have thought to say that mathematics can be a driving force for creativity!”.

At the end of our meeting with Daniela, we asked her what advice she would give the younger generation. “I would advise them to study a lot of maths,” Daniela replies, “but do it in an unconventional way. Mathematics is not a set of theorems; it has its own ‘grammar’ that allows us to discover the “why” behind everything in our daily lives. Mathematics allows us to attribute a meaning to things, it allows us to give answers to our curiosity and even to be very creative”.

ABOUT WOMEN IN SMART INDUSTRY – WISI

At Akkodis we want to champion a culture where talent matters, not labels. We have a team of 50,000 incredible people working at AKKA & Modis. Still not enough of them are women. This is why we have launched a new global initiative – Women in Smart Industry (WISI) Through highlighting the career journeys, insights, and experiences of our female colleagues WISI aims to empower and connect women.

Our ambition is to encourage more women to pursue careers in Smart Industry.