Brussels, June 7th, 2021 – AKKA Technologies, European leader in engineering consultancy and R&D services in the mobility sector is proud to announce the development of a turnkey conversion solution to repurpose grounded military transport aircraft into firefighters. The first kits have been designed for A400M and CASA C235 & C295 aircraft, with similar systems able to be installed in any other aircraft with an Aft Cargo Door.

AKKA’s aeronautics division in France has developed this, sustainable and cost-effective solution allowing military transport aircraft with Aft Cargo Doors to be temporarily repurposed into firefighters when necessary, thereby increasing their utilisation rate and ramping up aerial firefighting capacity at minimal cost.

This project illustrates the Group’s ambition to reduce the ecological footprint of existing infrastructures and vehicles through technology and innovation.

The practicability of this kit is underscored not only by its ease of installation but also by its low cost since it does not require any modification of the aircraft and can be removed at any time.

The kit is in fact remarkably simple, it consists of two10-ton water tanks to be fitted to the aircraft. Transportable by any vehicle in the airport, the installation is done with the help of winches. Once the tanks are installed on the plane, it takes about 10 minutes to fill them up after which everything is ready for take-off. This cycle can be repeated indefinitely. As it is a Plug and play solution, the kit is operational in less than 1 hour.

“This project is a great example of AKKA’s push to go beyond the status quo, by rethinking existing processes and products through innovation. Doing more with available resources was the core approach of the project, allowing the possibility to provide crucial support to firefighters without having to build or buy new aircraft. The ecosystem approach to increase sustainability by avoiding waste of material and resources is a blue ocean for our innovation strategy.” mentioned Pierre Lion, Group Director of AKKA Research, AKKA’s in-house R&D and innovation centre.

“We are very proud of the team for developing this simple, robust and cost-effective solution. The kit has been designed for A400M and CASA C–235 & C–295 aircrafts but is also compatible with many other aircraft such as the Hercules C–130, the Embraer KC-390 or the Spartan C–27J. AKKA is bringing all its historical expertise in aeronautics to bear in the development of value-added innovations within the industry. ” Pierre-Yves LAZIES, Vice President of Aviation at AKKA France. 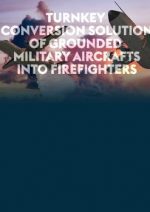